Parts of the display on the LCD of my CM901 screen started to become blank. On searching the web I found this to be quite a common problem.  The problem seems to be the bonding of the flexible connector from the LCD to the printed circuit board. I found one suggestion that advised heating the connection using a hair drier and applying pressure to the connection. some people had success using this method but when I tried it made the problem worse. I tried to find out how the connection was made at the production stage. There was very little about how it is done but I did find one web page that gave some information. The connection is not solder but a conductive adhesive. The joint is heated to above 130 Deg. C (It did not give a maximum temperature.) and held under pressure of about 30 Kg per square cm for about 3 seconds.  I decided to try this method so I made a tool which consisted of a piece of 3mm thick aluminium 50mm wide with a 50 watt heat sink resistor screwed to it as a heater. This is pressed against the flexible strip where it makes contact with the printed circuit board. The printed circuit board is supported below the connection point by the edge of some 4mm thick aluminium. I mounted this tool in a small arbor press. The 4mm thick aluminium was a piece of angle section and it was clamped to the base of the press. The 3mm piece of aluminium was clamped to the ram using a hinge arrangement which consisted of two pieces of fibreglass printed circuit board one either side of the aluminium fixed with a single bolt so it could pivot slightly. (This was to ensure that uniform pressure was applied all along the 50mm length.) The fibreglass was clamped to the ram using another small piece of 3mm aluminium as a spacer. The 4mm aluminium angle on the base was aligned with the 3mm piece on the ram. As the area of the edge of the 3mm aluminium is 3mm x 50mm this equals  150 sq mm or 1.5 sq cm so to get 30 Kg per sq cm needs a force of 45 Kg.
I worked out the force required on the handle of the press and hung a suitable weight on the handle with a piece of string. I found I needed between 10 and 11 volts to raise the temperature to about 135 Deg. C  (About 22 watts ) With the two pieces of aluminium not touching I raised the temperature to 135 Deg. C. I then positioned the printed circuit board so the connection point was in the gap between the pieces of aluminium and hung the weight from the handle of the press. After a few seconds I removed the power from the heater and cooled the plate down using compressed air. When it was cool I removed the board and reassembled the unit.  A drill press could probably be used with the spindle locked if you do not have an arbor press.
This is how to dismantle the thermostat. Remove the white card that is located on two circular pillars and held down with a sticky label. Remove the main printed circuit board which is held with plastic clips (Which are part of the case.) around it's perimeter. Remove the LCD assembly by releasing the clear plastic clips which pass through rectangular holes in the main board. It will require a little pressure to separate the 8 pin connector which connects the boards together.  Remove the LCD assembly from the clear cover by releasing clips at one end. There is a loop of clear plastic at one end between the clips. Open out the LCD  and its driver board so that it can be inserted into the bonding tool.
I have only done this once and it worked so I could just have been lucky.

View of the tool in the press. 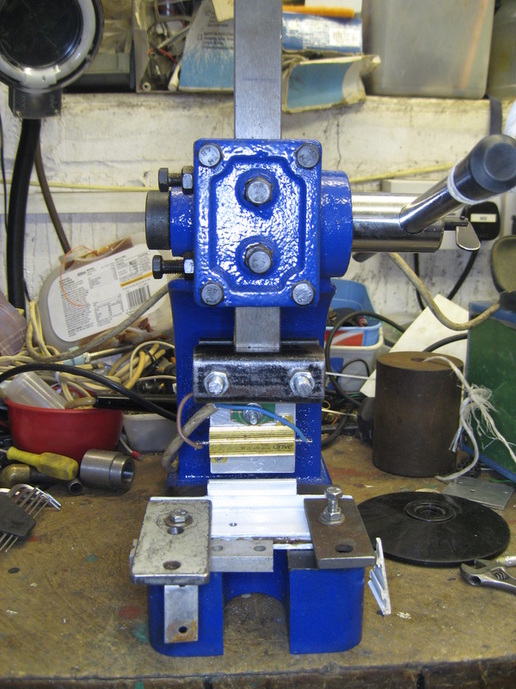 Closeup view of how the tool is mounted. 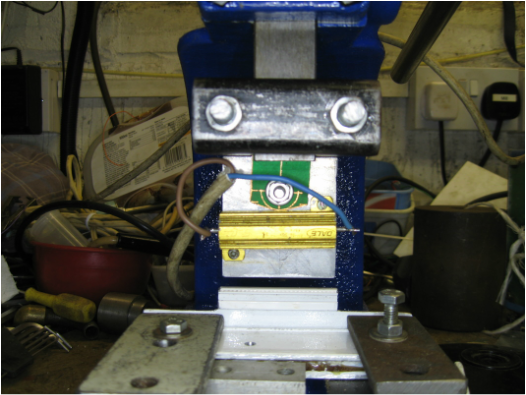 The heater part of the tool. 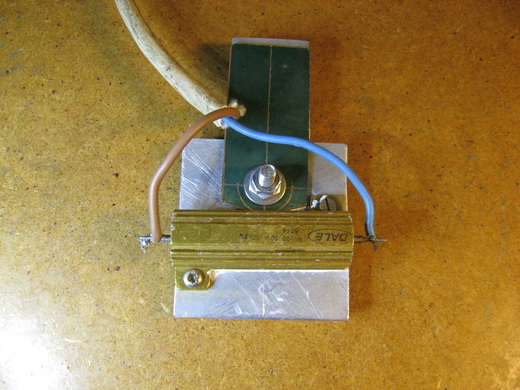