This is how I built my waist oil burner using the Hago Delavan syphon nozzle . The nozzel I used was the 30608-11 which is rated at about 1 gallon per hour. I did not use the adaptor that most people use to save on the cost and also to make the pipe system more compact.  The burner tube is made from some mild steel tube about 50 mm diameter.  The compressed air is fed to the nozzle via 15mm water pipe and the oil via some 6 mm copper pipe which passes through the 15mm  pipe. Air from the blower is fed into a short length of 50mm tube welded to the back of the burner tube.  The blower I used was from a bouncy castle bought on ebay for £5.00 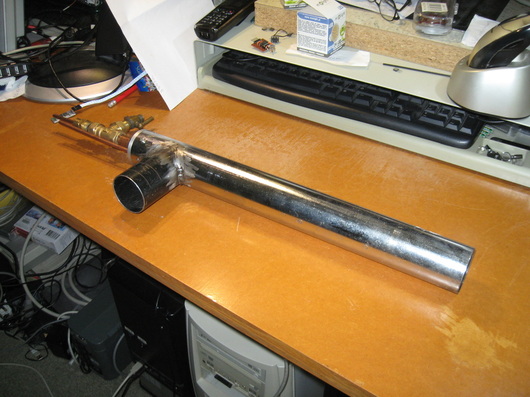 This is the back end of the burner showing the oil, compressed air and propane connections. (The propane is just used for starting the burner.)  The compressed air goes into the side of the 15mm tee via a tap. The oil connects to the 6mm pipe which passes through the tee an the 15mm pipe. The other 6mm pipe is for propane. The pipes are sealed where they pass through the aluminium block at the back of the burner tube with "O" rings. There is also an "O" ring in a groove in the aluminium block to seal it with the burner tube.

This is the home made nozzle adapter. It is made from part of a float valve. The end that connects to the float valve is board out to 12.7mm and a 24 TPI thread is cut to match the tread on the nozzle.  The thread is Whitworth form (55 Deg.) I found the nozzle fitted when the tip of the screw cutting tool was at a diameter of  14.7mm (This was from the DRO reading on the cross slide. The shoulder and part of the thread  was also machined off so the vane that causes the airflow to rotate could be fitted over it.  The part just behind the adapter on the 15mm pipe is just to centralise it in the 50 mm tube.  The oil connection to the nozzle is made from a piece of brass rod about 12mm diameter. It is drilled out to 6 mm at the back end to fit over the 6mm copper pipe and the front end opened up to 7 mm so that it slides over the oil connection on the nozzle. The 7mm hole has a chamfer on the front of the hole so that the "O" ring goes in easily. This item was then silver soldered  to the 6mm copper pipe. (Soft solder would probably be OK.)
This is the home made vane to create a rotating air stream. It was made from a piece of steel tube turned to fit over the nozzle adapter. The front end is turned down for a length a little greater than the thickness of the vane to allow the vane to be held on by peening over the end. The vane was made from about 1.5mm thick steel sheet. 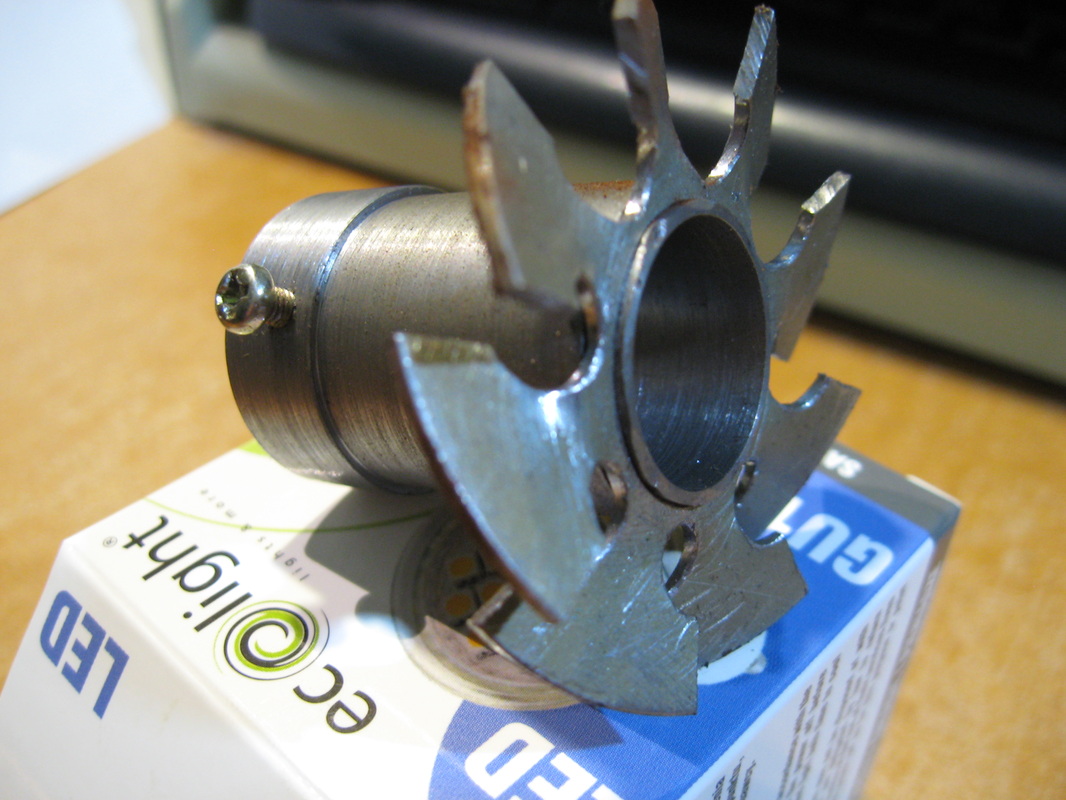 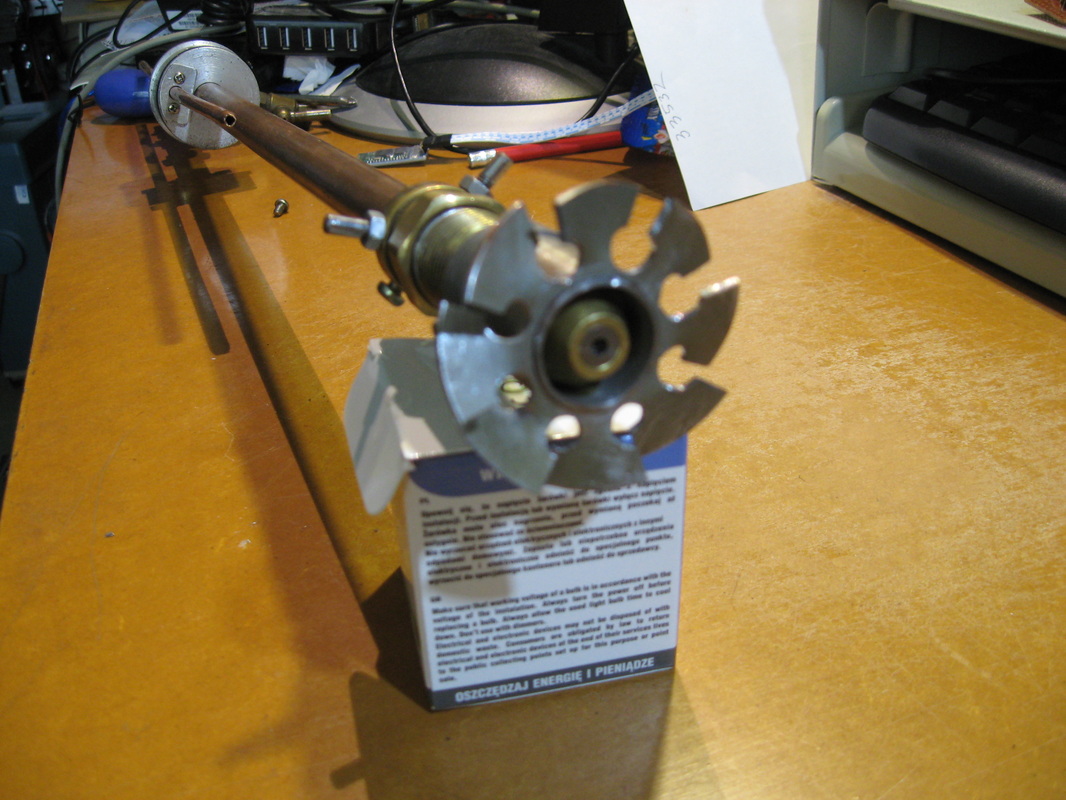 This shows nozzle with the oil pipe attached. This passes through the 15mm pipe. 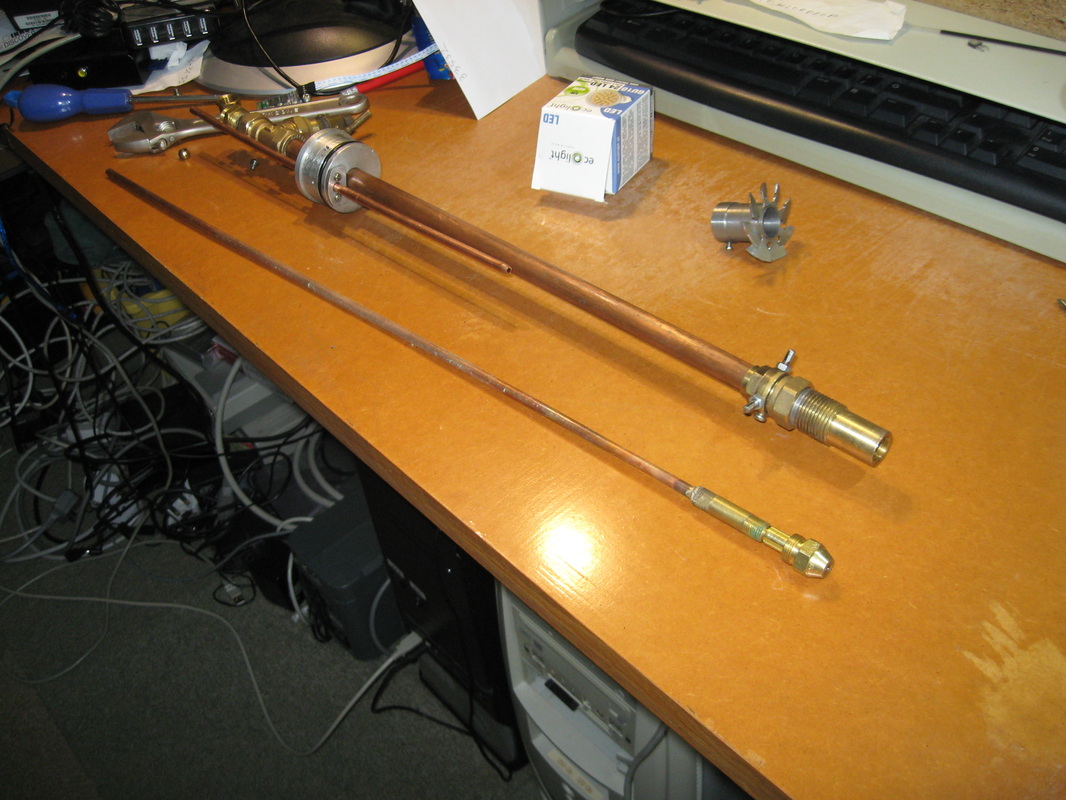